ActiViz is the C # and .Net wrapping (Visual Basic,…) of the Visualization Toolkit. ActiViz offers numerous functionalities and allows easy integration of 2D / 3D visualization in .Net applications and access to numerous digital post-processing algorithms offered by the library.

This training will introduce the common uses of the ActiViz toolbox using a practice-oriented methodology.

The training mixes theory and application with a set of tutorials and exercises.

This training course will be taught in English. Course notes are also in English.

Kitware SAS is registered as a training center in France

All our training can be offered on site with a custom agenda. Contact us for more information. 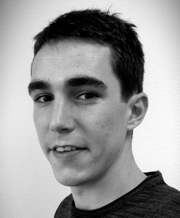 Lucas joined Kitware in september 2017 after a six-month internship as part of his final year in engineering studies at CPE Lyon. Lucas mainly worked on augmented and virtual reality related projects using VTK.

Lucas had already spent his gap year in computer science and scientific visualization at Kitware in Carrboro, where he mainly worked on segmentation methods. He also worked on the CMake architecture in order to set up python wrapping for TubeTK.